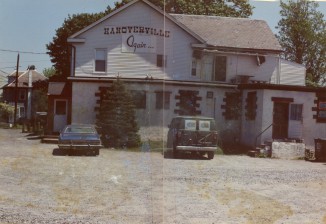 Beginning its life as a stagecoach stop in the 1800s, the Hanoverville Road House has found the perfect equation for casual grace. The bar and grill have plenty of country charm with the dining rooms broken up into small nooks divided by half-curtains. The general ambience created by this decor is very laid-back.

The gallery, to the left as you walk in, features prints of historic Bethlehem by the local renowned artist, Fred Bees. The four prints displayed in the front hallway are Norman Rockwell’s famous “Four Freedoms”: Freedom of Religion, Freedom of Speech, Freedom from Want, and Freedom from Oppression. Norman Rockwell was commissioned by Life magazine at the beginning of World War II to do covers that would boost national morale. From this assignment came his paintings of the “Four Freedoms”. 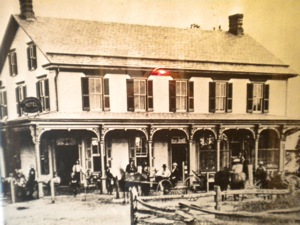 he main structure of the Road House was built around 1825. It was a typical old colonial-style farmhouse. The soft rolling hills, fertile soil, and fifty inches of annual rainfall made this area perfect for farming corn, potatoes, wheat, and other crops. In 1837 the building was converted to a hotel, general store and post office, with a stagecoach stop at the northeast corner. The place remained the same through the Civil War and into the turn of the century. Even though the business changed hands, the bar always remained open. By the 1930′s, the Road House was used as a restaurant, bar, and hunting lodge. Ring-necked pheasants were plentiful in this area. Through the 1940′s and 50′s, the Road House gained notoriety as a family dining establishment. Sunday dinners became a local institution. During the 1960′s and 1970′s the first floor walls were removed to form one large room. A stage was built along with two bars. Rock and roll became the order of the day. Canned Heat of Woodstock fame performed a few times, but the biggest night belonged to Tiny Tim. So many tickets were sold that the floors had to be reinforced. It was also during this time that female mud wrestling made its debut.

Some points of interest within the building:

The rifle with the bayonet is an 1863 Union Army issued Springfield.

The rifle barrel is a 58 caliber, accurate to 1/2 mile. A good marksman could shoot three aimed rounds per minute. This was the Union weapon used at Gettysburg.

The tire in the barroom is a rear slick from the 1994 Indy Car #6 owned by the team of Newman/Haas. The driver of the car was Mario Andretti, who resides not far from here in Nazareth. There’s more Andretti memorabilia throughout the Taproom area. This includes posters and Andretti’s signature wine.

The painting in the Statesmen Room is of a canal in Holland. The plank was found in that canal, and the true color paint was made from materials found in the water. <

The complimentary gourmet Teenee Beanee jelly beans and Mike and Ike candies located by the front door are manufactured in Bethlehem by Just Born, Inc. To date we calculated we’ve used about 12 tons!

Get Social With Us